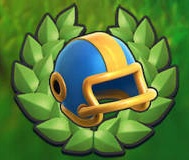 So, if you saw our video yesterday, you’ll have seen our 50-50 success-failure on Touchdown Draft mode in Clash Royale. The mode first came out in 2017 and it comes back around regularly as one of the challenge options – but we’ve definitely not really got the hang of it!

The game mode works quite differently to your normal ‘attack towers / defend towers’ approach in the main game – so, what’s Touchdown Draft all about?

So, what does this all mean…?

Well, firstly it means that cards that are good in the normal game may not be useful in Touchdown mode, especially stuff like Spells…

Spells are good if they can deal a lot of  damage to groups – like Rocket, Fireball, Poison, Quake and Arrows – Touchdown mode is chaotic and draws groups of Troops together, so taking out a lot of enemy Troops in one go could lead to victory! Cloning, Healing, Lightning, etc. will have limited effectiveness. However, a well timed Freeze, Lighting or Heal near your Touchline or the enemy one could be enough to push you to victory or prevent a Troop crossing your line – so if you do get one of these cards, save them for the finish lines!

Buildings can still be useful (as distraction or defence, as well as spawning randoms little Troops who might accidentally make it across the lines!) Some of the best ones would be Mortar, X-Bow, Goblin Hut, Furnace or Barbarian Hut.

Troops You really want guys with range and a good mixture of air and ground cover, to maximise damage. A Troop card running through the middle of the pitch with good range can take out Troops on either side covering most of the Arena.

Dart Goblin and Princess both have good range – so keep them protected and they will help you in Touchdown. Other good Troops are ones with ability to hit multiple Troops in one hit:Wizard, Executioner, Valkyarie…

The Best Cards in Touchdown Mode?

Above would be the best Legendary card picks – although I also like Magic Archer for range, so a good alternative to Princess… And for your standard cards- Hog Rider and Ram are fast and very difficult to counter if your opponent has used their Elixir. Also, hard to kill Troops like Gollum can make it across the line – just very slowly….