Today we check out the latest updates to the Minion Rush game, which has been around since 2013 but has some great new levels and missions based on the new Despicable Me 3 movie – half a billion downloads of this game apparently – WOW! Then, you can see how Melvis and Hopper cope with a Minions trivia quiz – do they know Phil from Dave? You’ll have to find out…

Don’t forget, you can subscribe to our channel for regular family-friendly Minecraft and gaming videos, hit the thumbs-up if you like this video and if you try Minions Rush or beat us on the trivia app then let us know in the comments. 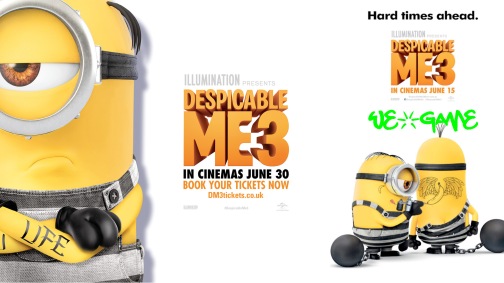 Bello! 😀 Minions are back!!

We’re going all kind of bananas this week because the latest Despicable Me movie is out on Friday and we can’t wait to top-up on minions, Gru and fluffy unicorns!

To celebrate the release of Despicable Me 3 we’ve done a couple of minion related videos to get you in the mood for all things yellow and villainous 😀 so check out the blog later this week to see what we’ve been up to. In the meantime, you can check out the movie trailer here…

Yes, we’re back playing Clash Royale today because it’s 2v2 week… In these battles you can join another player from around the world or someone from your own clan and team up to take on two other players in a Clash Royale MEGA BATTLE!!

Don’t forget, you can subscribe to our channel for regular family-friendly Minecraft and gaming videos, hit the thumbs-up if you like this video and if you play Clash Royale and would like to join the We-Game clan, get in touch and you could feature in a future video!

“Look into my eyes and I will read your mind…”

Or, in the case of Akinator, it’s a bit more: “Download my app and I will guess who you are thinking of…”

For our second iPad gaming video we’re showcasing the Akinator app available on iPad and Android. Join Hopper and Melvis as they try and trick Akinator – or at least get some Silver and Gold awards for coming up with some difficult-to-guess characters!

Don’t forget, you can subscribe to our channel for regular family-friendly Minecraft and gaming videos, hit the thumbs-up if you like this video and let us know your ideas for a character that will stump Akinator!!

Welcome the the first video in our new iPad and tablet gaming series!

We’re starting off with Clash Royale, spin-off game from Clash of Clans both by Supercell. Hopper and I have been playing this a lot over the past few weeks, to build up our collection of cards to battle each other and other players with.

See who wins the battle and emerges victorious this time 😀

Don’t forget, you can subscribe to our channel for regular family-friendly Minecraft and gaming videos, hit the thumbs-up if you like this video and if you play Clash Royale and would like to join the We-Game clan, get in touch and you could feature in a future video!

As you’ll see from the video we’ll be posting this week, Hopper and I have been loving playing Clash Royale recently. Today, the game’s creators – Supercell – are releasing an update to the game that changes some of the powers of the existing cards… This happens from time to time, Supercell say it’s based on feedback from the players, but today’s changes are pretty big and look like they’ll take down some of the most popular Clash Royale cards.

You can read the full release from Supercell here on their blogpost: https://clashroyale.com/blog/release-notes/balance-changes-coming-6-12

The ones that Hopper and I have and use a lot, which will be affected are:

The Tornado – duration will go from 3sec down to 2.5sec – this is a great card for holding back a mob of attackers to give you chance to get some defence in place, or for your towers to target them whilst they’re stuck in the vortex. It sounds like it will still be effective, but only against some of the weaker mobs groups like skeletons and goblins – to get some decent effects from it you’ll need to combine it with an attacker like a Wizard or Executioner – or maybe a Rocket!

The Log, which is a neat little defence item that rolls over your opponents  team and flattens them will have a shorter range: down to 11.1 from 11.6.

One of my favourites, the Goblin Gang will now have only 2 Spear Goblins instead of 3… I think this will make a real difference and wonder if they’ll end up dropping out of my regular deck…?

Some cards are being increased in the update, which include the Inferno Dragon getting a 7% hitpoints increase as well as a faster re-targeting, which isn’t too wrong – they often seemed to go down without much of a fight.

What do you think of the changes, are they too much or about right? The change comes in today, so bye-bye Mister Goblin, maybe three was a crowd…

That’s what this Harry Potter origin film trailer has picked up since it came out last week – and we got pretty excited when we saw that they would be making a prequel film for the Harry Potter story, looking at Voldemort – or Tom Marvolo Riddle – as a young boy and how he became the Dark Lord.

You can check out official trailer here:

Apparently, the idea for the movie has come from fans, who made a fan-trailer in the first instance, which has now been agreed by Warner Bros to expand into a full feature film… Due in 2018, the main reason Gianmaria Pezzato and co-director Stefano Prestia have got the go ahead was because they are making the film for no profit and will release it for free on YouTube.

The idea came from a re-reading the sixth book, Harry Potter and the Half-Blood Prince, where the pair found themselves with several questions. There are clues in the book that have inspired their ideas, but as with most book to screen adaptations not all could be explored in the main movies. The content of the trailer also suggests that it might draw on details from the script of Harry Potter and the Cursed Child which is currently running on the London stage.

So, what do you think of a film will tell the story of the rise of the Dark Lord before Harry Potter ever existed? Hopper and I were pretty excited when we saw this and we loved Fantastic Beasts from the wizarding world of JK Rowling… We can’t wait for more!

It’s been a while hasn’t it? Sorry for the lack of videos, but laptop gave up and it’s taken a while to get up and running again… hopefully, we’ll be caught up soon and have some fun new videos to watch and games for you to try out.

On that note, take a look at the latest Minecraft Realms minigame we’ve been playing – Maker’s Spleef!

A spleef is a game where you beat your opponent by knocking out the blocks underneath them and send them to their doom! Or in this case, drop them on to turquoise wool – it is apparently, very strange and dangerous wool that kills you in Minecraft.

Melvis really doesn’t do so well when it comes to the arrow round – and the ‘insane’ mode is truly bonkers, we couldn’t work out what was happening except that we kept dying. So, check out the latest video and let us know whether you think you would make better ‘spleefers’ than we did! 🙂