Server Basics You Need to Know

Before you join a public server, there are some basic things you and your child need to know:

So, I think that’s it for the basic ‘things to know’ – let’s get onto a server!

Joining a public Minecraft server is actually quite easy – certainly easier than loading mods can be!!

Compatibility – The first and most obvious issue might be that the profile that you’re trying to join the server with is too high or too low for their version. i.e. if the main Minecraft game is now running on 1.9, but the server is set up for 1.8.3 and you go in on that profile, it won’t allow you on.

This can be easily resolved (in a similar way to how you create the right profiles to use various versions of mods), by creating a new user profile from the Minecraft launcher to add to your drop-down list on the main page:

On the next screen, it will normally say ‘Always Use Latest Version’ in the ‘Use version’ drop-down box. This is where you should click and select the correct, compatible release version of Minecraft to match with the server you want to join. To help me remember which is which, I update the profile name to include the release number after my name. Click ‘Save Profile’ when you’ve done this.

If you now log back in to the Multiplayer Game – as per instructions above – the server game should be ready and waiting for you to join! 🙂 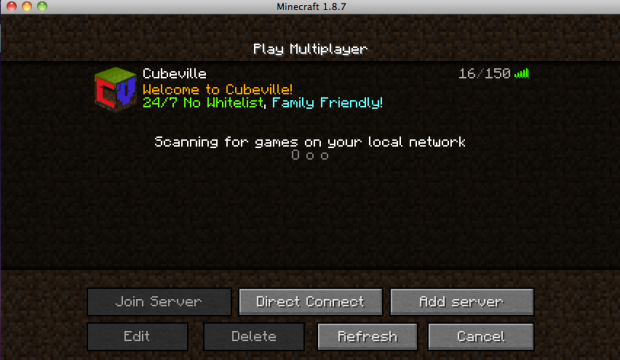 Whitelisting – This is where a server is protected by a ‘whitelist’ – essentially a list of usernames that are permitted to join the server. If your name is not on that list, then you will not be allowed to join.

In order to join a whitelisted server you need to apply to have your Minecraft username added to their list (usually via a form on their website). Sometimes it will clear in a few hours, others take a few days. You will need to make a separate application for each Minecraft username that you wish to add. Once you’re on the whitelist, you should be able to join the server via the same process outlined above.

Whitelisted servers do offer an extra element of reassurance that the users are known to the server administrators.

That’s it for now! Hopefully with the above instructions you’ve got everything you need to join multiplayer Minecraft worlds on public servers. As this is quite new for HopperBoy and me, we’ll be trying out some of the servers we’ve found in the next few weeks and drop some reviews on here to let you know what we think.